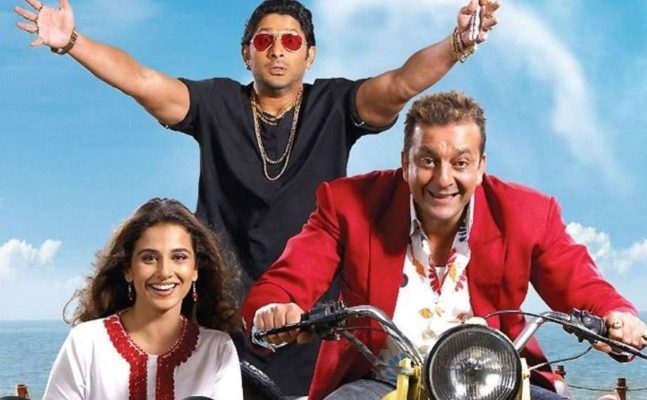 This review investigates Mahatma Gandhi’s relevance in our present turbulent times depicted in popular culture. Debate on the Gandhian way of life and its values in our so called “developed and modern civilization”, are discussed for a comprehensive understanding. These debates were creatively explored with a touch of humor in 2006, Raj Kumar Hirani’s directorial film, Lage Raho Munna Bhai. In the process of addressing these debates, the movie had endeavored to revive the values and principles of Gandhi in the hearts of the people. The lead cast of the film includes Sanjay Dutt (Munna Bhai), Arshad Warsi (Circuit), Vidya Balan (Jhanvi), Dia Mirza (Simran),Boman Irani  (Lucky Singh),  and  Dilip Prabhavalkar (Mahatma Gandhi).

This sequel of the 2003 movie, Munna Bhai MBBS, was exceptionally well received and went on to collect more than twice of what Munna Bhai MBBS had collected; Which was estimated about Rs. 130 crore at the box office (Madhukali 2018). Owing to the fact that the movie powerfully connected the Gandhian philosophy to the audience, locating it through the popular culture, the movie made an attempt to educate the younger generation about the principles of non-violence and peace. It is perhaps the most prominent Gandhi reference in popular culture. Generally the popular culture is identified as the vernacular or a people’s culture that predominates in a society at a point in time. Hence, Popular culture, which is also known as the culture of the people, is determined by the interactions between people in their everyday activities. That includes greetings, styles of clothing, the use of language and slangs, and  the food habits. Mass media has a very important role to play in popular culture. (Delaney 2012: 120-121). Among all, cinema is undoubtedly is the greatest source of effective mass media instrument of contemporary times. Apart from providing cheap entertainment for the masses, it has the innate potential to easily become a means of mass instruction and mass education (Bahadkar 2010).

In this context, in post-independent India, as well as in the world, Gandhi has become a persona in popular culture that towers over any other figure in India’s historical pantheon of leaders. There have been a range of depictions of Gandhi, as the symbol of peace and non-violence to a great politician (Karkare 2017). His philosophy is used by popular culture to reflect on the modern situations that life presents and the way people handle these situations, through the means of cinema, theater, literature, fashion etc.

Accordingly, Hirani’s Bollywood  movie which is based on the life of a Mumbai underworld don, coined a street term to describe Gandhian principles and philosophy “Gandhigiri”; Gandhi’s ideas with a Mumbai lingo, to help ordinary people solve their problems. The protagonist Munnabhai is possessed by the spirit of Gandhi and he goes about conducting his life truthfully and non-violently. He also preaches the benefits of cleanliness and requests to co-operate and co-exist in society, while simultaneously maintaining the street credentials of a bhai (don).

Gandhi has been shown as a symbol of truth and non- violence because he employed these two as his most potent weapons to win over the opponents. Thus, the concept of Gandhigiri is articulated on the basis of plain emotions like goodness, compassion and reasonable discipline. The movie depicts how people should not be forced to believe in Gandhi’s philosophy. What matters is how people get influenced and feel in a certain way to follow his values and principles. The movie made Gandhi speak to Munna in the kind of language that Munna would speak, to give Gandhi a popular touch.

Gandhi called his overall method of non-violent action Satyagraha. This means “civil insistence on or tenacity in the pursuit of truth, aimed to penetrate the barriers of prejudice, ill-will, dogmatism, self-righteousness, and selfishness, and to reach out to and activate the soul of the opponent” (Parekh 1997 68).  In other words, Satyagraha as a Truth-force was an outgrowth of nonviolence. This method of Satyagraha according to Gandhi could win over any situation if applied cautiously. The movie shows by example that Gandhi’s ways could work in our times too. There are scenes where a man spitting and the owner of the house wiping the spit and smiling back at him instead of yelling. The idea was to shame the person with goodness, something that Gandhi believed in instead of fighting, winning people over with kindness. Another scene shows Munna filling the house of his rival Lucky Singh with flowers and trying to win the fight with the tactic of love. Munna also silently sets up his camp outside the house of Lucky Singh and protests without harming anyone, to make Lucky Singh feel guilty and  give up his ego and co-operate with Munna. In another example of the non-violent tactic, the corrupt official was shamed, as he was involved in the acts of corruption. To deal with this situation, Munna advises the senior citizen to go to the clerk and take off things, including his clothes and put them on the table listing out the cost of each item, so as to cover up his bribe.  This in turn creates a huge commotion around and visibly embarrassed clerk is left with no other option but to release his pension. Munna uses radio to create awareness in the public, about the ways in which Gandhian values can be applied in today’s context. Simultaneously, he changes the way of looking at the life and the attitude of listeners, in dealing things in accordance with those values. Munna not only preaches people, he also adopts the values in his life as well. As a result, he turned his occupation from Dadagiri to Gandhigiri.

Moreover, the movie successfully depicts the Gandhian way of winning a dispute with keeping in mind his values and philosophy, and shows his ideas haven’t faded even in the popular culture, but has been over-shadowed by the extreme characters of modern-day life.

Therefore, the movie was much appreciated . It received high praise from movie critics for offering a respectful cinematic acquaintance, as well as, being instructive but inspiring. However, a small number saw it critically. A celebrated Film critic Duara argues that “the accomplished cultural sophistication and political genius of Mohandas Karamchand Gandhi has to be dumbed down to the astoundingly moronic levels of ‘Lage Raho Munnabhai’” (newworldencyclopedia 2010).  While filmmaker Jahnu Barua notes, “Gandhian philosophy is serious business and Lage Raho Munna Bhai is not the right way to show it” (Ibid).  The movie, however, fails to provide an alternative perspective on how to remain calm in case of loss of faith in Gandhian philosophy, what to do when satyagraha, non-violence, and truth fails to pursue the opponent. As Munna points out in the movie, Gandhi told to maintain composure and present other side of the  cheek when someone slaps you on one side, but did not tell what to do after getting slapped on the both sides, which can be misleading for the audience. These critiques provide another perspective of people looking at Gandhian philosophies as a matter of historical importance and of greater significance which cannot be easily portrayed in the popular culture.

Despite criticisms, the movie had a strong cultural impact in India, popularizing both Gandhi and Gandhigiri and stirring the popular imagination leading to a number of Gandhigiri style protests in India and the U.S. It is the first Hindi movie to be shown in the United Nations. The film won seven awards, including Film fare, Screen and Zee Cine awards and was nominated for many more (News18 2013). For the first time in Madhya Pradesh the jail department introduced a scheme for teaching prisoners Gandhigiri and patriotism through a three-day counseling session through Bollywood films before their release, including a special screening of Lage Raho Munna Bhai (Tomar 2018).