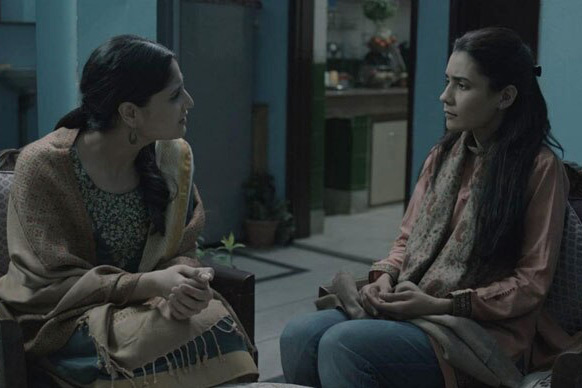 There are days when you let your hair down. When you are without a To-do list. When your children are away at a birthday party, your husband has gone for his ‘me-time’ and you have the remote in your hand!

It was on a quiet, lazy Sunday afternoon like this one that I switched on the TV. With no definite watch-list in my head, I started browsing the Netflix list. In all honesty, my only criterion was the duration. That is how I ended up choosing the 90-minute long ‘Soni’. A Netflix original where the fresh faces of the cast caught my attention.

So, without any expectations or frames of reference, on a quiet Sunday afternoon in the metropolis of Delhi, I discovered a gem.

metropolis of Delhi, I discovered a gem.

A blank frame. The sounds of a lurid voice harassing a woman. Nothing surprising about that! As a woman who has grown up in Delhi, I know that sickening voice only too well. The shot opens to reveal a wiry young woman cycling fiercely on a lonely road. The man harassing her is on a cycle too. What happens next is the perfect setting for the hot-headed, short-fused and the strong character of Sub Inspector Soni. After incessant heckling, her  fuse blows.  SI Soni stops to beat up the man. Enter her frantic colleagues trying to hold her back. It’s a smart screenplay that establishes that such experiences are not  new in the life of this cop! The pervert ends up in  hospital with a broken jaw and SI Soni is admonished by her boss, IPS Kalpana Ummat.  Kalpana, elegant, strong, calm and in control  exudes the confidence of her position. The two women-cops are the central characters of the story, standing in sharp contrast with each other, and yet  standing together.

The film had me hooked. Within a few minutes, the personal spaces of the two cops are established. As Soni enters her home and  shuts the door to the outside world, we discover her character. Refreshingly, no dialogue, just a deft screenplay. We discover her simple frugal existence as she waters her plants, washes her face on a small sink with a pink-coloured plastic holder that has her tooth brush and paste. A simple ritual of lighting a dhoop at her small altar makes her so relatable.

The entry of a neighbour who brings with her Soni’s clothes that flew off her clothesline reveal a man’s shirt that had been lying there since days and a simple dialogue, ‘neeche hee padee rehne dete’ (you should have left it lying there) reveal the conflict in her personal space, the hint of a troubled relationship, a man who is now absent!

In sharp contrast, IPS Kalpana walks into her lavish living space. A pretty beautifully furnished home. A husband who is a very senior IPS officer.  She has domestic help. But, in her personal space as a daughter-in-law and wife,  there are expectations. The mother-in-law in her very first scene reveals her unhappiness with the night duty of her bahu.

The film does not lag anywhere and deftly moves deeper. Taking the viewer inside the police station, you see the cacophony and the pressure of the cases that come in, the procedures to be followed, the noise and the conflict of a stressful job. The two women cops stand out. Kalpana, who demands that procedures be followed, meticulously and honestly. Soni, who looks up to her boss and works hard. Kalpana is the leader of the pack. In command and very respected. Soni is her special mentee as there are hints of ‘a covert operation’ that is being carried out by them.

Soni is a film that makes a powerful statement on the double-burden women have to shoulder as they navigate their work spaces and home. The constant pressure on 32 year old Kalpana to have a baby, and a husband who very casually and authoritatively advises her to be ‘less emotional at work’. He wants her to be more of an IPS officer, who doesn’t get too close to her subordinates.

SI Soni, despite being a cop, constantly faces  sexual innuendo and misbehaviour — whether from  those punished and sent to the control room, asking for the phone numbers of the female cops or when stopped at a naka for drunken driving, a naval officer makes obscene passes at her.

Her uniform does not keep her safe from the constant male badgering.

Soni’s neighbour advising  her to wear sindoor at work as it would keep her safe was a hard hitting statement of the deep-set stereotype of women being seen as commodities to be possessed. A married woman already belongs to a male as opposed to a single woman who is still ‘available’.The sindoor marking her as unavailable or owned!

The scenes are ordinary but always keep the central narrative alive. The inequality and stereotypes that every woman has to face in her daily life, be it a cop or a professor. Like a get together at Kalpana’s sister-in-law’s home . The men sip their drinks and gossip while the women tend to the kitchen, organising the food and serving it. How does it matter that Kalpana has been on a demanding night-duty.

In another scene, SI Soni crops up in conversation. A flip comment, ‘these women cops want to be Kiran Bedis to grab attention’. There’s another dialogue that stands out and highlights the deep class difference that exists in our society, ‘inke ghar mein maar peet, domestic violence aam baat hai’. The class divide and the stereotypes that cloud our conversations and mindsets are subtly presented.

Kalpana is constantly asked to care less, be less emotional and  is answerable to her seniors as she bats valiantly to keep her mentee and co-worker Soni out of trouble.

Soni on the other hand has an estranged husband who is trying hard to repair their relationship. One discovers a man who has let Soni down, broken her trust, is unreliable and inconsistent. Yet, when a stone is hurled at Soni’s house, he appears like the alpha male. ‘Had I been here, this would have not happened!’ The male ego makes one smile in this taut moment.

The film has an interesting build-up of intensity. The relationship between the two women cops and the mutual respect and trust  that exists between them is not spelt out but palpable.

The night vigils, the covert operations carried out by the duo to farm-out corrupt cops who harass young lovers for petty bribes are another interesting angle. This is probably beyond the call of duty but these are motivated and head-strong cops who take pride in their work. A simple dialogue about ‘moral policing’ makes a strong point. In a nation faced with bigger problems, why is the force being used for moral policing?

Soni has no dramatic ending, no central plot that needs to be resolved and fixed, no heavy message that needs to be delivered in the climax. It’s a mature film that offers a deep look into the lives of working women who valiantly battle their professional and personal lives.

So there’s no heavy monologue or a theatrical breakdown when Soni decides to resign. She walks away from a lurid conversation at a naka and hands over her walky-talky to her co-inspector. An equally subtle scene where her mentor shares Amrita Pritam’s Raseedi Ticket with her with three simple words, ‘Soni, resign mat karo’.

In the last shot, as Geetika Vidya Ohliyan as SI Soni is reading the iconic feminist Amrita Pritam and puts is down when a call comes in, I was left stirred and provoked.

Saloni Batra as IPS officer Kaplana Ummat is impressive. She makes a convincing cop. Her body language as she slips from being a senior cop to an empathetic aunt shows her tremendous talent.

Geetika is impressive in her debut. Both the fresh actors slip into their demanding roles with ease. I do not know much about the intricacies of film making, but I was impressed by the deftness and clarity of the director.

Cinema should provoke thoughts, open debate, pick up topics that matter. Soni does all that. But a sobering thought is that this film would have bombed at the box office. It is not meant for seekers of entertainment. It will not rake in moolah. In this age of entertainment, I feel happy that such cinema is possible because of platforms like Netflix and Amazon Prime.

My me time is almost over too. The door bell will ring any time and the children will burst in. My husband will return too. And while we regroup to share our day, I make a mental note to pick up my copy of Raseedi.